Hillary Clinton recently acknowledged the reasoning behind  her controversial email flap  while acting as U.S. Secretary of State was rooted in the simple, practical desire not to carry aroun
d multiple mobile devices for managing both personal and
official email accounts.

The incident underscores how deeply ingrained the culture of convenience and bring-your-own-device (BYOD) has become in our society, as well as how important email security is in a highly mobile age.

Play by the rules?

Even though all confidential State Department information is sent across secure diplomatic cables rather than email (at least in theory), should Clinton have played by the rules and maintained a state.gov email address for handling official state business while acting as the U.S.’s chief diplomat?

Absolutely. Clinton herself admitted that “it would have been better” to use multiple email accounts.

While the media had a field day with the email fiasco, raising flags about the transparency of a presidential hopeful’s actions while serving in a public role, Clinton made roughly 55,000 printed pages of official correspondence from her mixed-use personal email account to the State Department. The reactionary move raised even more questions about the content of the “personal” emails not made public, some of which were intentionally deleted.

What’s not being talked about, however, is maintaining secure email in an age where convenience is the modus operandi of everyone.

Remember that other politicians, including Mitt Romney and Sarah Palin, have been caught using free email services to conduct official business.

Clinton’s dual-use email was certainly filled with correspondence that should be public record and plenty more that she has the right to keep private. What if Clinton were able to maintain the transparency required by her role in the public sector, while still maintaining the privacy she’s afforded in her personal life?

The Associated Press reports that the server used to transmit and receive Clinton’s official and personal emails is a “home brewed” system based out of her New York state home. While unusual, a home-based email server would give Clinton more sophisticated control over her emails than if she used a free email service such those operated by Yahoo, Google or Microsoft.

However, according to the same news report, “homebrew” email servers “are generally not as reliable, secure from hackers or protected from fires or floods as those in commercial data centers.” Email servers hosted in dedicated, professional facilities “provide monitoring for viruses or hacking attempts, regulated temperatures, off-site backups, generators in case of power outages, fire-suppression systems and redundant communications lines.” 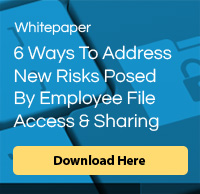 Topics: Solutions, In the News

See the Power of Vaultize. Schedule a Free Demo